Contopus sordidulus
Passeriformes
Members of this diverse group make up more than half of the bird species worldwide. Most are small. However their brains are relatively large and their learning abilities are greater than those of most other birds. Passerine birds are divided into two suborders, the suboscines and the oscines. Oscines are capable of more complex song, and are considered the true songbirds. In Washington, the tyrant flycatchers are the only suboscines; the remaining 27 families are oscines.
Tyrannidae
Unlike most passerines found in North America, flycatchers are suboscines. Suboscines have a simpler syrinx (voice box) than the oscines (songbirds), and hence have less-developed and less-elaborate songs. Their song is innate, and does not contain a learned component. The flycatchers are the only suboscine passerines found in North America north of Mexico. Nearly all suboscines (and all Tyrannidae) are native to the New World, and they are much more numerous in the tropics, where several other families occur in addition to the Tyrannidae. Flycatchers are named for their foraging style. They sit quietly on a perch and dart out to grab a flying insect from the air, and then return to their perch to wait for the next meal to fly by. Many also forage by hovering next to foliage or over the ground. Most have a distinct, upright posture and a slight crest. They have small feet as they do not typically walk or run on the ground. Most flycatchers are monogamous. The female generally builds the nest, incubates the eggs, and broods the young, although both parents feed the young. Flycatchers of the genus Empidonax pose many identification challenges for birders. Range, habitat, vocalizations, and behavior must all be taken into account to distinguish between members of this group.
Common summer resident east. Fairly common west.
Source of Bird Audio

The Western Wood-Pewee is a small, nondescript, gray bird with two lighter wing-bars and no eye-ring. It has a whitish throat, dark bill, and slight crest.

Western Wood-Pewees use a variety of habitats, including open coniferous forests, wooded streams, and forest edges.

These active foragers concentrate in the sub-canopy layer, flying out from an exposed perch to grab prey in mid-air, and then returning to the perch. They also hover beside foliage, gleaning prey from the surface of leaves and twigs.

Flying insects are the predominant prey.

The male sings to defend a nesting territory and attract a mate. The female builds the nest on a horizontal branch, usually well out from the trunk. The nest is a compact cup of grass, plant fiber, feathers, and hair in a spider-web frame, at varying heights from the ground. The outside of the nest is camouflaged with moss, bud scales, leaves, and lichen, and often looks like a bump or knot on the branch. Typically, clutches are three eggs, but can be from two to four eggs. The female incubates the eggs for 14 to 15 days. Both parents help feed the young, which fledge at about 16 days, and leave the nest area within three days of fledging.

Western Wood-Pewees spend the winter in northern and western South America and are late returnees to the Northwest. They generally arrive in mid-May and depart in late August and September.

Two subspecies of Western Wood-Pewee are found in Washington, divided by the Cascade Mountains. While in general this species is widespread and abundant, populations are declining in many areas. Declines have been attributed to loss and degradation of habitat on both the breeding grounds and the wintering grounds. Creation of clearings attracts this species, which shuns dense forests. Thus it may inhabit edges of clear-cuts for 5 to 10 years, then vanish as new growth develops. Forest fragmentation creates additional edge habitat and may result in increased populations. Cattle grazing appears to degrade habitat.

Western Wood-Pewees are most common in eastern Washington at lower elevations, within the forested zone. They can be found in western Washington, especially in some of the dry areas in the San Juan Islands (especially Lopez Island) and on the northeastern Olympic Peninsula. Look for them in clear-cuts. They are also common along the coast, at Grays Harbor and Willapa Bay. 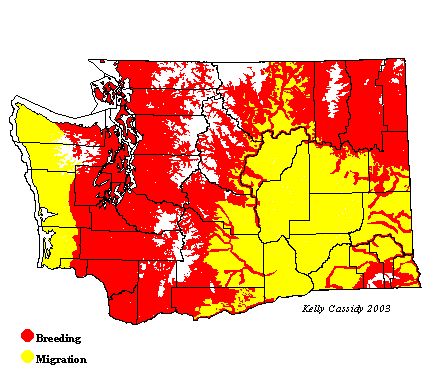