Chordeiles minor
Caprimulgiformes
Adapted for aerial insect foraging, most members of this unusual group have a short, weak bill with bristles at the base and a very large mouth opening. Typically nocturnal or crepuscular (active at dusk and dawn), they are more often seen than heard, as their calls pierce the night loudly and repeatedly. During the day they rest quietly on the ground or on a branch. Their soft plumage is usually brown or gray and highly cryptic. The name goatsucker comes from an ancient Greek myth that claimed they suckled milk from goats. This myth is unfounded and perhaps started as an explanation for the birds’ wide gapes and their low flight over pastures in the evenings. Just one family is found in Washington:
Caprimulgidae
These unusual-looking birds have flat heads and very short bills with extremely wide gapes. Many have rictal bristles around their beaks; these specialized feathers may help funnel prey into their mouths as they forage for flying insects. Many swallow stones as grit to help grind up the hard exoskeletons of their insect prey. They have large, dark eyes that reflect light, and they are often spotted on roadsides when their eyes shine from car headlights. They generally have long wings and maneuver well in flight. Although they spend much time on the ground, they have short legs and small, weak feet. When perching on tree limbs, they usually perch lengthwise along the branch, not crosswise like most birds. They do not usually build nests, but lay two eggs on the bare ground. Both parents help raise the young.
Common summer east. Uncommon west.
Source of Bird Audio

The Common Nighthawk is a cryptic bird most often seen in flight, when it can be easily identified by the white bar across each long, pointed wing. This mottled gray and black bird has large eyes. It also has a tiny beak with a large gape, surrounded by stiff feathers called rictal bristles, which help the bird catch its aerial prey.

Common Nighthawks live in a variety of open habitats, from shrub-steppe, grassland, and agricultural fields to cities, clear-cuts, and burns, as long as there are abundant flying insects and open gravel surfaces for nesting.

This species is most active at dusk and dawn, when it forages in flight. During the breeding season, males take time out from foraging to perform display flights, flying high up in the air and then diving, ending with a booming noise as they brake out of a fast dive. Vocalizations include a loud, distinctive call, given in flight.

Originally nesting on open ground along rivers or other gravelly stretches, the Common Nighthawk has adapted to city life in many areas and will nest on gravel rooftops. The two eggs are laid directly on sand or gravel with no nest. The female does most of the incubation, which lasts for 18 to 20 days. Once the young have hatched, both parents regurgitate insects for them. The young begin to fly at 18 days and can feed independently at 25 days. Within one month, they are on their own. Each adult pair typically raises a single brood each season.

Small numbers of Common Nighthawks still breed in western Washington, and can be found in the Puget Trough and out to Ocean Shores (Grays Harbor County) from June into early September. They can be found from mid-May through August, but some birds remain into early September. They are fairly common out in the open desert in the Columbia Basin and in the sagebrush and Ponderosa-pine zones. 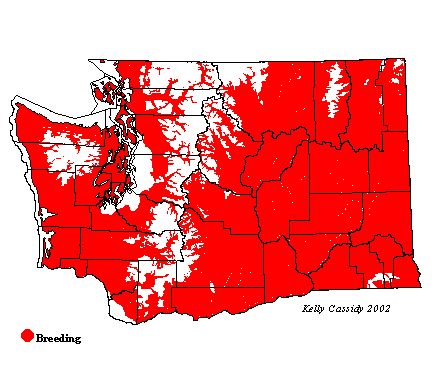