Falco columbarius
Falconiformes
The hawks, eagles, falcons, and allies make up a group known as the diurnal raptors, because they are active during the day. Members of this group typically use their acute vision to catch live vertebrate prey with their strong feet and toes. They vary from medium-sized to large birds and most have an upright posture and strong, short, hooked bills. The New World vultures (not closely related to the Old World vultures) were once classified with the herons and allies, but they have provisionally been grouped with the diurnal raptors on the basis of recent genetic studies. Members of the order Falconiformes in Washington fall into three families:
Falconidae
This widespread and diverse family of predatory birds is divided into two groups. Some of the fastest-flying birds can be found in the falcon group. Built for speed, most falcons have pointed wings and long tails. Many catch avian prey in flight, but others prey on large insects, mammals, and ground-dwelling birds. Members of the caracara group are more opportunistic, taking carrion as well as live prey and often foraging on the ground. Regardless of the approach, members of this family almost always use their feet to catch prey. Like other birds of prey, females are larger than males. They are generally monogamous and form long-term pair bonds. Some caracaras build stick nests in trees, but most species in this family nest on cliffs, in other birds' nests, or in cavities, and typically do not add any nesting material. The female generally incubates the eggs and broods the young, while the male brings food to the nest. Once the young no longer need to be brooded, both parents bring food. Extended parental care is the norm for this family, as it takes a relatively long time for the young to learn to hunt. In Washington, one species from this family belongs to the caracara group, while the others are true falcons.
Uncommon winter. Fairly common migrant. Rare breeder.
Source of Bird Audio

Merlins are small, compact falcons. Three subspecies are found in Washington. The Black Merlin is solid black on the head and back, and dark with a minimal amount of light streaking on the breast. It has a white throat patch. The Taiga Merlin is lighter in color than the Black Merlin, with a bluish-black back, a white eyebrow line, and white bars across the tail. The Prairie Merlin is lighter in color than the other two.

Merlins breed in rugged terrain that provides both trees for nests and open areas for hunting. In Washington, they can be found in very small numbers near openings in coniferous forests in the Puget Sound area, along the Cascade crest, and at other high-altitude areas in the North Cascades and in northeastern Washington. During migration and winter, they are found in more diverse habitats, including coastal areas, estuaries, agricultural lands, and suburban towns

Merlins capture airborne prey, employing a level sprint with abrupt turns. Rarely do they use the steep dive technique for which their larger relative, the Peregrine Falcon, is well known. They cache extra food on a branch or in an unused nest. Sometimes they fly low to the ground, surprising their prey. Merlins practice a variety of acrobatic, in-flight, courtship displays. They are cantankerous birds, seldom passing up a chance to hassle another raptor.

Small birds make up the majority of the Merlin's diet. Rodents, bats, and reptiles are also taken, as well as large insects such as dragonflies, which are especially hunted by fledglings in the late summer. Coastal Merlins take advantage of large numbers of migrating shorebirds during the fall and winter. Starling flocks often attract Merlins.

Merlins are monogamous. The female typically lays 4-5 eggs and does most of the incubation. The male provides the female with food, and takes over incubation duties while she eats. When the young hatch, the female broods and the male hunts. He brings food back to the female, who in turn, feeds it to the young. Both parents help rear the young. Merlins usually use other birds' old nests, or rarely, a natural cavity. They mainly nest in conifers between 18 and 36 feet high in cities, or, in open prairie, in old crows' nests.

The Black Merlin subspecies is generally non-migratory, but the Taiga Merlin migrates south from Canada into the US, Central America, and northern South America. Females head south ahead of the males, typically in mid-August. In spring, males arrive ahead of the females. Merlins migrate during the day, but may begin to move up to two hours before dawn, and thus are often missed in migration counts and hawk watches.

Previously there was concern that the population had been negatively affected by pollutants, but it has recently been shown that no changes in abundance have been recorded over the past 40 years. Some evidence indicates that wintering populations may actually be increasing, due to increased breeding success in the north. Habitat loss and potential loss of wintering grounds (for migrant populations) are potential concerns. The status of the Black race is not well known, since it is one of our rarest and most elusive nesters. 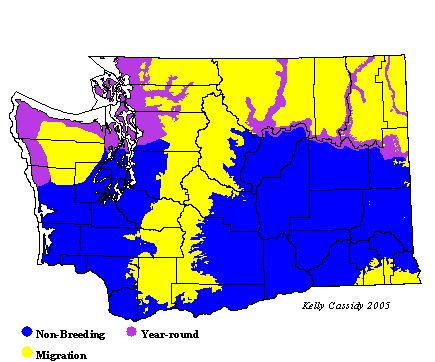