Setophaga ruticilla
Passeriformes
Members of this diverse group make up more than half of the bird species worldwide. Most are small. However their brains are relatively large and their learning abilities are greater than those of most other birds. Passerine birds are divided into two suborders, the suboscines and the oscines. Oscines are capable of more complex song, and are considered the true songbirds. In Washington, the tyrant flycatchers are the only suboscines; the remaining 27 families are oscines.
Parulidae
This large group of small, brightly colored songbirds is a favorite of many birdwatchers. Wood-warblers, usually called “warblers” for short by Americans, are strictly a New World family. Most of the North American members of this group are migratory, returning in the winter to the tropics where the family originated. Warblers that nest in the understory tend to have pink legs and feet, while those that inhabit the treetops usually have black legs and feet. North American males are typically brightly colored, many with patches of yellow. Most North American warblers do not molt into a drab fall/winter plumage; the challenge posed to those trying to identify warblers in the fall results from looking at mostly juvenile birds. Their songs are generally dry, unmusical, often complex whistles (“warbles”). Warblers that live high in the treetops generally have higher-pitched songs than those that live in the understory. Warblers eat insects gleaned from foliage or captured in the air. Many supplement their insect diet with some seeds and fruit, primarily in fall and winter, and some also eat nectar. Most are monogamous. The female usually builds the nest and incubates four to five eggs for up to two weeks. Both members of the pair feed the young.
Uncommon to locally fairly common summer resident.
Source of Bird Audio

The American Redstart is a unique warbler. The male is black with orange patches on each wing, on the sides of its breast, and at the base of its tail on either side. The male's throat is black, but its breast and belly are white. The female is gray where the male is black, and yellow where the male is orange. The female also has a white eye-ring. Juveniles and first-year males look like females, although first-year males generally have some black on the upper breast or head. The American Redstart has a relatively short, wide bill.

Throughout their range, American Redstarts are found in moist, second-growth hardwood forests, with a dense shrub layer. In Washington, they are typically confined to forested streamsides, especially those with willow and alder thickets. During the winter, American Redstarts inhabit a variety of tropical and subtropical lowland wooded habitats.

American Redstarts are very active foragers. They glean some of their prey from foliage, but they capture most of their food in midair, flying or jumping into the air to snag prey. They commonly spread their tails and wings, displaying their orange or yellow spots. These flash-patterns may flush prey from the foliage, and also make American Redstarts relatively easy to find.

Small insects and other invertebrates make up most of the American Redstart's diet. In late summer, they may supplement this diet with berries and seeds.

Monogamous pairs are the norm, but some males may have two or three mates at a time. The male shows the female potential nest sites during courtship, and the female makes the final selection. The nest is nestled against a trunk, or attached to vertical stems, from 4 to 70 feet off the ground. The female builds the nest, which is an open cup made of bark, grass, rootlets, and other plant fibers. The lining is usually made of feathers and hair. The outside may be camouflaged with lichen and birch bark, and the whole nest is held together with spider webbing. Sometimes American Redstarts will use old nests of other birds. The female typically incubates 4 eggs for 10 to 13 days. Both members of the pair feed the young. About 9 days after hatching, the young leave the nest, and the parents divide the brood, each taking half, and continue to feed them for at least a few more days.

Most American Redstarts migrate south through North America and winter in Mexico, Central America, and northern South America. Western breeders appear to migrate to western wintering areas, including southern California, Mexico, and Central America. They migrate at night, generally in the late spring and early fall.

Although American Redstarts are still widespread and common throughout their range, they have experienced declines in many regions. Some of these declines may be from habitat loss due to natural maturation of forests, but others may be directly or indirectly related to habitat degradation from fragmentation. Fragmentation creates more edges, which initially attract more American Redstarts because of the increased brush in these areas. Later, however, predators and nest parasites are also attracted to edges, resulting in reduced productivity at forest edges. In a study in British Columbia, over 63% of American Redstart nests were parasitized by Brown-headed Cowbirds. In the West, many streamside forests have been eliminated or degraded, which may account for significant declines seen in western populations. Habitat destruction on the wintering grounds is also a conservation concern. In addition to natural forests, American Redstarts use shade-coffee plantations during the winter; supporting shade-grown coffee may help protect some of their winter habitat. 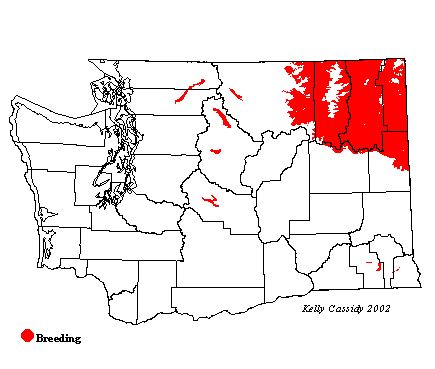