Aphelocoma californica
Passeriformes
Members of this diverse group make up more than half of the bird species worldwide. Most are small. However their brains are relatively large and their learning abilities are greater than those of most other birds. Passerine birds are divided into two suborders, the suboscines and the oscines. Oscines are capable of more complex song, and are considered the true songbirds. In Washington, the tyrant flycatchers are the only suboscines; the remaining 27 families are oscines.
Corvidae
The crows, jays, and allies are intelligent and crafty birds. They are opportunistic, and most thrive living among humans. For this reason, many have been persecuted as pests. Many members of this family cache, or store, food for the winter, which allows them to be year-round residents at high altitudes and in northern climates. Many live in forests, and most nest in trees. Crows, ravens, magpies, and jays are generally long-lived and monogamous, and form long-term pair bonds. Some species have helpers at the nest. Their nests are typically bulky and made from sticks, and both sexes generally help build them. Females incubate the young, but there are exceptions where the male helps. Both sexes usually feed and care for the young. The corvids are omnivores, eating seeds, nuts, insects, carrion, and small vertebrates. They often rob the nests of other birds of eggs and nestlings. Most are social, forming flocks, especially outside the breeding season.
Fairly common resident west.

Western Scrub-Jays are medium-sized, slender birds with long tails. The Western Scrub-Jay has blue upperparts, a grayish-brown back, and light underparts. It has a well-defined blue breast-band that contrasts with its white breast and throat. A white line just above each eye divides the blue crown from the darker cheek patches.

Western Scrub-Jays are typically found in oak woodlands. In Washington, they are also found in residential areas with low- to mid-density development.

Western Scrub-Jays usually forage in pairs, family groups, or very small flocks outside the breeding season. They forage on the ground and in trees, caching much of the food they find and retrieving it later.

Western Scrub-Jays are omnivorous, with a diet that varies by season and region. In summer, they eat many insects, spiders, and snails, and in winter, they shift to berries, acorns, and other seeds. They eat rodents, reptiles, amphibians, and the eggs and young of other bird species. They also visit bird feeders.

Western Scrub-Jays are typically monogamous, and nest in shrubs or low trees. Both members of the pair help build the nest, which is a thick-walled cup made of grass, twigs, and moss, lined with soft rootlets and hair. The male brings food while the female incubates 3-6 eggs for 15-17 days. Both adults help feed the young, which leave the nest at 18-19 days. They typically raise one brood each year.

Western Scrub-Jays do not migrate, but some birds disperse, particularly in fall, which has enabled the species to spread north into Washington.

Western Scrub-Jays have been expanding their range northward and eastward since the 1970s. This expansion is most likely due to increased residential development and feeding by humans, and will probably continue. In Washington, the breeding population has expanded from the Portland, OR and Vancouver, WA area, up and down the Columbia River, and northward to King County, with wandering birds found north to Skagit and Snohomish Counties.

Western Scrub-Jays can be found regularly year round in western Washington lowlands from Puget Sound south. They are occasional as far north as Seattle and have been found breeding north of Enumclaw and in Seattle in small numbers (King County). They can be found rarely all the way to the coast in Grays Harbor County and east to Lyle in Klickitat County. Ridgefield Wildlife Refuge in southwest Washington is a good location for finding them. 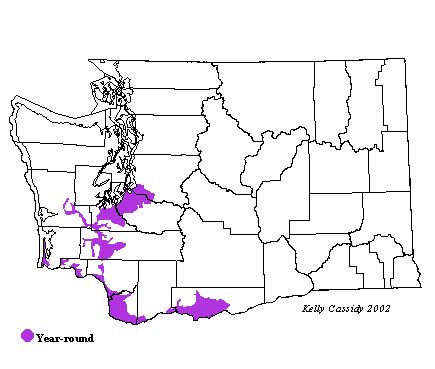